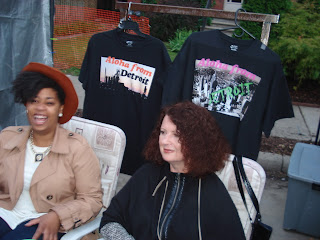 Pictured: NEW POP LIT's Kathleen Crane (right) chatting with young Detroit go-getter Kendall Waterman.
**********************
With all the food vendors, beer sellers and t-shirt hawkers at Detroit's huge "Dally in the Alley" street fair, who was there to represent the lit game?

Read our official report on our appearance at the event right here.
Posted by Karl Wenclas at 8:41 AM No comments: 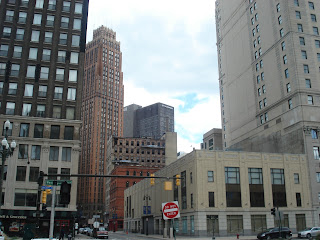 Here is an article by Douglas McIntyre of  24/7 Wall Street which discusses Detroit's failure to regain population. The thinking being that, because it's not gaining population now, it won't. An interesting and pessimistic premise, which is wrong.

First, Detroit is in the process of bottoming. A long-term bottom, one that took place over decades. The last "seller" of the city sold. Everyone was down on it. The city reached a point from which it had nowhere else to go but up.

A stock or commodity or market-- or a city-- usually spends time at a bottom. Meanwhile, it's accumulating latent energy; the strength and resources for an eventual comeback. That's happening with Detroit now. The rebound in population and business won't be immediate. That's not how nature with its laws works.

Second, a host of creative people are moving into Detroit. In absolute terms their number is tiny-- but in time, their presence will be felt.

Granted, it will take an unforeseen spur to jump-start the comeback and bring more people into town. NEW POP LIT believes art and literature will be that spur. See our blog posts on the matter here and here.

Is there a better city for creating an internationally-recognized new bohemian arts scene?

We have the necessary grittiness and authenticity. Street cred-- in multiples. Artists are gathering. Soon, so will writers.

But Mr. McIntyre of 24/7 Wall Street has the data! Numbers and spreadsheets. There, right in front of him. They show. He knows.

What esteemed Mr. McIntyre lacks is imagination and vision. Things never found on a spreadsheet. Also absent is a sense of history-- a sense which knows the world is in continual flux. Nothing stands still. The world we see now is not the world which will exist ten years from now. No one can predict the coming changes-- changes usually made by those who see a potential future and go about creating it. We at NEW POP LIT see that potential here and now in Detroit.

We also know that Douglas McIntyre is no gambler. Carefully-cautious pawn-progression chess moves only. No spectacular leaps.

If he were a gambler he'd bet on Detroit!

NOTE: If you're anywhere near Detroit this Saturday, stop by the NEW POP LIT booth at the huge "Dally in the Alley" street fair in Midtown aka the Cass Corridor. Hear more about our plans to set up new publishing in Detroit-- and take a look at our prototype lit journal. For more info about the event read our main site's most recent post.
Posted by Karl Wenclas at 10:26 AM No comments: