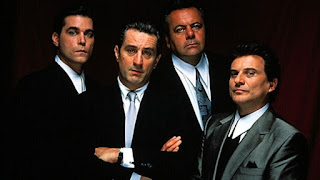 IN THE 19TH CENTURY Italian arias were the pop songs of the day-- catchy tunes which had everyone singing. One of the best of them is Giuseppe Verdi's "Women Are Fickle" ("La Donna e Mobile") from the opera Rigoletto. The swaggering character "The Duke" sings it near the start of the last act, to express his joy of love and life-- the joy of singing itself.

It's why the updated version presented at the Detroit Opera House this past weekend was so apt. Set in New York's Little Italy in the 1950's, it's more relevant than the original to an audience raised on "Goodfellas," "The Sopranos," and Godfather movies. The slickly-dressed mob chorus was belting out songs of cockiness from an art deco lounge like a collection of Joe Pesci characters. Young mob boss the Duke, played by Joshua Guerrero, resembled Al Pacino in both look and gesture. Tragic Rigoletto remains a hunchback, modernized to wise-cracking bartender.

The audience loved it! The Italian language and street-smart posturing of the original suddenly fit. No dusty artifact this. On stage the opera came vibrantly alive.

The plot was always bad melodrama, and remains so, appropriate to the noirish atmosphere and shadowy staging. What matters most in opera is the music. The songs. Rigoletto has a host of them. When the Duke croons one along with his gang; or when he and Gilda-- the young woman he's trying to seduce-- sing their love duet on an iron fire escape, it becomes late 1950's street singing. Think African-American do-wop songs like "Duke of Earl," or Italian-American a cappella groups like Dion and the Belmonts and the Four Seasons. But better. 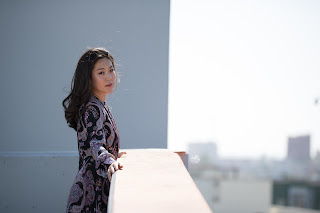 The young woman who played Gilda, So Young Park, is a protege of Placido Domingo, one of the famed Three Tenors. She came to town with a huge reputation. Her voice and acting more than lived up to it. Her vulnerability was poignant, her high notes surprising and moving. A star in the making.

Swag, song, setting-- this opera, like Carmen a year ago, is the perfect introduction for anyone to the wonders of opera. It was heartening especially to see a number of young people in the audience, many looking like first-timers. They saw live singing at its ultimate. These ARE the best voices on the planet.

The joy of song. The joy of art.
Posted by Karl Wenclas at 7:07 AM No comments: