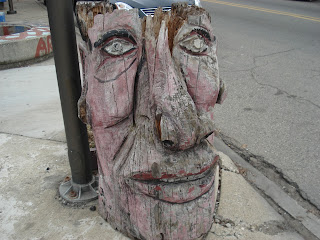 I've noted an aversion in town, among some, to positive publicity about Detroit coming from New York City and other big media centers. For instance, articles which showcase Detroit as a haven for artists.

Is Detroit a perfect town for artists, writers, and other DIYers? Of course not! The recent arrest of graffiti artist Shepard Fairey says it's not. The question is whether there's ever been a perfect city for artists to live in and work. History says not.

In the 1950's when Kenneth Rexroth and the Beats were revolutionizing poetry and prose in San Francisco, they faced constant harassment from police and other legal authorities. But they also had a few sympathizers. They had the atmosphere of the city at that time to draw on for their art (long before dot.com'ers from Silicon Valley took the town over). They also had themselves.

I was in a recent twitter debate (@DetroitLiterary) with the former editor of Detroit's main freebie newspaper about this very topic. She found laughable the idea that Detroit could become the new center of publishing in the U.S. I positioned the discussion in terms of "Detroit versus New York"; terms she didn't like.

Yet it's a legitimate way to present the challenge. Manhattan and its "Big 5" monster publishing conglomerates dominate the book business. To not acknowledge this would be like a new car company not noticing the presence and clout of automakers based in Detroit.

There are solid reasons for auto manufacturers to be located in and around Detroit-- the Great Lakes; St. Lawrence Seaway; and geographic position as a major gateway transit point among them. (The location of the industry here wasn't an accident.)

There are equally compelling reasons for the publishing industry to NOT be located in New York.

The economic facts can't be wished away. Right now Manhattan is a ridiculously expensive place in which to live and do business. (Think office leasing rates, for starters.) On top of this, the Big 5 publishers cling to what has become a fatally flawed, top-heavy, vertically-organized business model. In this time of print-on-demand and e-books; when an entrepreneur can create a virtual office at a coffeeshop; "economies of scale"-- the rationale for monopoly and size-- has become an irrelevant concept.

The person I discussed this matter with claimed advantages for New York, but didn't state what they are. Access to chi-chi Manhattan restaurants? An abundance of Ivy League grads? She also claimed disadvantages to operating out of Detroit.

No doubt Detroit CAN be a tough place in which to live. I know this well, having lived in Detroit's Cass Corridor in the 1990's, when it truly was the Cass Corridor. (An experience I've written about, including in an essay referenced here.) However, a writer or artist who has things too easy-- who doesn't exist in an environment with some edge to it-- tension to stimulate the senses-- will produce pablum. As we've seen out of the Big 5 the past so-many years.

(For a famous movie scene which makes a similar argument, see this.)

(For a discussion of publishing timidity, see my interview with John Colapinto of The New Yorker magazine. Note his final answer.)

Why Detroit versus New York? Why not? A city is in competition with other cities for jobs, investment, and talented individuals. If a spate of pro-Detroit articles in the New York Times or Vanity Fair spurs talented people to move to Detroit, this is a good thing. If the articles are part fact, part fiction,, it means nothing, because in time the myth of Detroit as an artist's city will necessarily become full reality. For much of the world right now, "Detroit" is a creature of the imagination. This is a unique opportunity to be used.

What Detroit needs more than anything else is people, of all kinds. The city has the geographical size and infrastructure for a population of two million. The city limits currently contain a third of this.

Notice the way the city is laid out. The gap between downtown and the New Center, for instance. In the 1920's, when the city was growing swiftly; when it was one of the richest cities on the planet; city planners envisioned a new New York.

Given that entrepreneurs like Dan Gilbert are investing huge sums of money on the prospect of a revived Detroit, there needs to be enough reasons for more people to move here, to keep the comeback going. Real estate deals alone won't cut it. You need people living in those condos and houses-- or on land that now sits vacant. Organic arts movements in a city make that city an appealing place for artists, tourists, and young professionals alike. People want to be part of a dynamic happening. They want to visit and live in a magical, mythical city that stimulates the imagination. (See Paris of the 1920's.)

In creating such a scene, writers are as important as artists, because they'll write about, publicize, mythicize that time and that place.

All that's needed for Detroit to become the center of new publishing is for people in Detroit and the world to believe it's possible.
Posted by Karl Wenclas at 9:25 AM

Leaving aside your "debate" (not discussion?) with Valerie, I'll respond to the kickoff claim of "an aversion in town, among some, to positive publicity about Detroit coming from New York City and other big media centers."

What I've seen is a reality check and challenges to source selection that sometimes appears narrow -- not a resistance to positive coverage. (That last word, in my view, has more than a nuanced difference from "publicity" when talking about news and feature articles rather than press releases or ads.)

Any aversion appears to involve a pattern among some NYT and Vice visitors who relied solely on artists and curators from Cranbrook, MOCAD and other traditional institutions as go-to sources, foregoing a deeper dive to find emerging voices from the Red Bull Gallery, CCS or independent studios.

Similarly, outsiders' reports on Detroit's culinary scene also have been criticized for leaning heavily -- or solely-- on "usual suspects" such as Supino's, Slows and Avalon while ignoring Kuzzo's, Sweet Potato Sensations and Sister Pie.

But I see absolutely no "aversion . . . to positive publicity about Detroit" -- not from "Detroit's main freebie newspaper," not from its two dailies that also have freebie digital editions, not from bloggers, not at r/Detroit and not from the Deadline Detroit freebie news site where I contribute.

Hi Alan. Thanks for the response. I assume you agree with the overall theme of the post-- that anything is possible in this town right now :-) (I've seen the "competition" up close and wasn't impressed!)

Yes, your royal highness, I do agree with the main thrust.

Not only is anything possible -- possibilities already have become realities, with more visions turning tangible every month. Great time to live in, work in and play in our comeback city and region.

Here's the interesting part of the matter:
IF the history of Detroit runs in cycles (the argument of the David Sheridan essay I linked to); and
IF Detroit bottomed out in 2008/9, and has just started going back up;
then the opportunity in this town is vast indeed. Say, if the up move lasts a few decades, and the population doubles or triples, with accompanying investment, jobs, and so on.
Investors such as Dan Gilbert must believe this, whether consciously or instinctively. Their investment makes no sense otherwise. In fact, a Gilbert minion told me recently that they require many more people living downtown, for all the new businesses here to really thrive.
Is this conceivable?
I lived for a time in Philadelphia-- the same geographic size as Detroit. Philly has 100,000 people living downtown. What does Detroit have? 10,000? The room for growth downtown alone is enormous. Not to mention the expanses of vacant land within 15-minute drive of downtown.
What can get many, many more people living in Detroit?
My bet is another industry (like publishing)and/or new arts activity-- of international reputation.
Or, the comeback is barely beginning. . . .