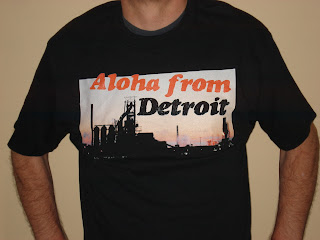 Purchase your "Aloha from Detroit" t-shirt now, using the BUY NOW button to the right. Help support the cause of new literature and questionable Hemingway tales.
Posted by Karl Wenclas at 9:56 AM

Couldn't the man have been both a lumberjack and an American Indian?

Of course. But Hemingway differentiated the two groups in the Nick Adams stories, which might indicate the jobs didn't usually go to native Americans.